Last night it rained, a serious, no-nonsense rain, thrumming against the windows and glugging in the downspouts. There was no mistaking it for summer’s passing showers. 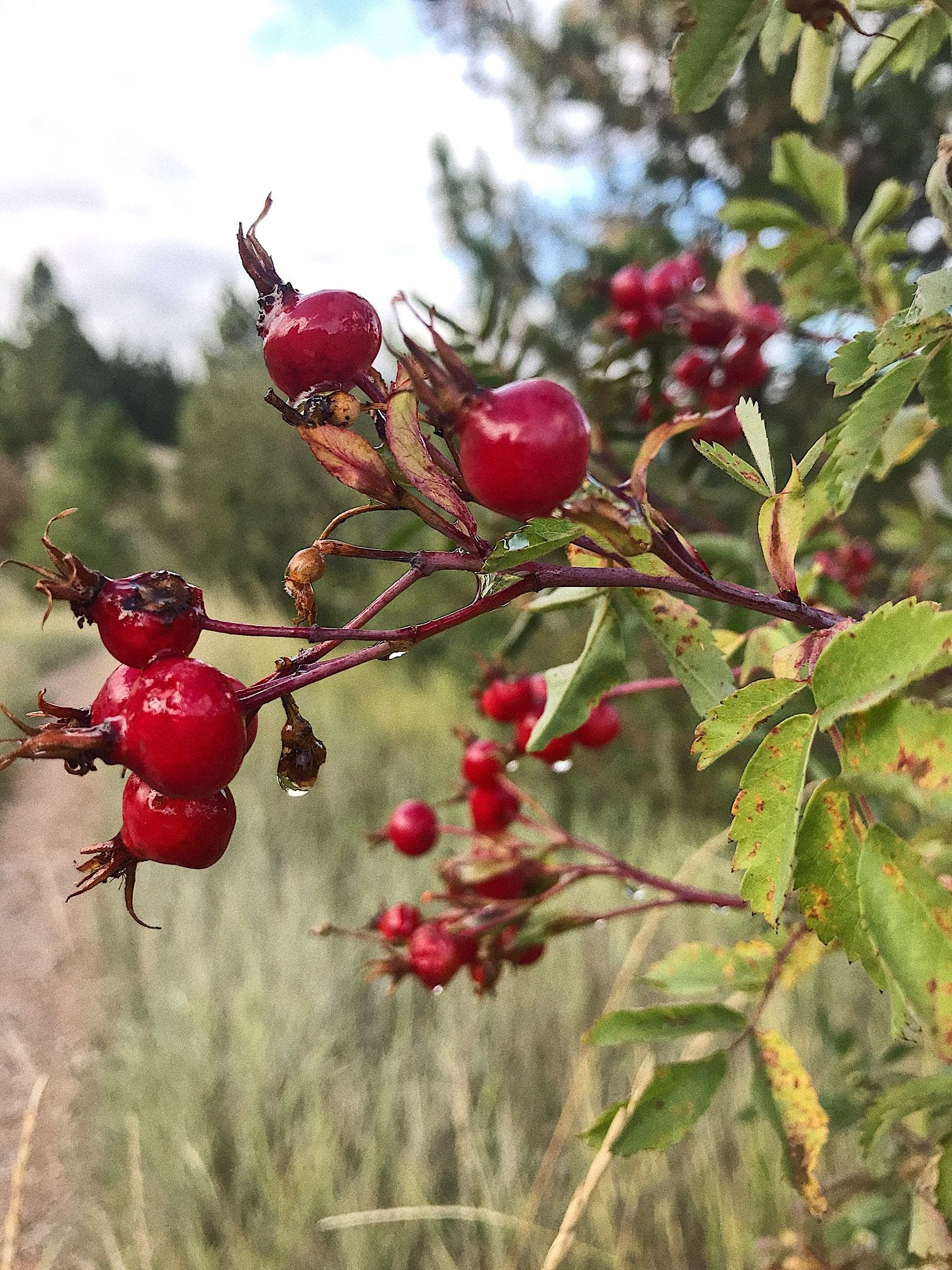 This was an earnest rain, autumn’s first full-throated announcement.

This wet morning, I walked the dogs through a different world: same trail, new palette. The ponderosa trunks were rain-black. The broad-bladed grasses lay silvered and flattened. Along the trail, lacy blue clusters of elderberries dripped bright drops, and rosehips, the waxy red of a child’s crayon, presented themselves for the picking. The grasshoppers, which yesterday had scattered before the dogs like sparks struck from flint, had disappeared entirely. Instead, crows cawed overhead and a lone doe raised a wary neck as we passed.

What is it about the change of seasons that is so exhilarating? Why does the crispness in the air send that little hopeful frisson shivering through me? I’m not even clear about what I’m hopeful for, or if hope is the right word. But this morning each rain-glazed leaf seems intricately beautiful (as, surely, it always has been, had I eyes to see) and everything – including me – seems on the verge of becoming more deeply itself.

It’s a funny thing: this idea of becoming more deeply oneself. How can you be more –well, you?

There’s a complexity at the heart of this question; some sense that we are not yet all we are meant to be. In the faith tradition in which I was raised, this tension is called the “Already/Not-yet.” It holds that by virtue of being alive, we already participate in the divine. And yet, at the same time, our participation has not yet come into fullness. In essence, we are and are becoming.

I think it was this idea that I caught sight of while walking among the rain-sharpened colors this morning, as if somehow this daily walk had, overnight, closed the space between what is and what is possible. As the dogs furrowed among wet foxtail and timothy, the distance between the Already and Not Yet seemed diminished. That deeper, truer version of being shimmered almost everywhere.

2 thoughts on “Consider: Already/Not Yet”

Lindsay’s memorial jars, from this week’s podcast from Each Holy Hour. 🍃 Listen to “And Yet” with new, original music from @cajoss , on Spotify. 🍃 Copy and paste link: https://open.spotify.com/episode/16rSbkBP4Zx6XwwGaHWd2u?si=oNoq5yVUSSezn0VPdu7TBQ
ENTER. Listen to our podcast, Each Holy Hour, on Spotify. 🍃. www.eachholyhour.com. 🍃 Beautiful path is at Grace Church, Bainbridge Island. #mindful #breathe #meditate
Copy & paste to listen to our new podcast, or simply go to Spotify podcasts and search: Each Holy Hour.
“What is it about the change of seasons that is so exhilarating?
::Let us leave the surface and, without leaving the world, plunge into God - Teilhard de Chardin:: This fern leaning over a little irrigation channel captured me. Had to climb down a steep bank to return the favor. #beautyeverywhere #eachholyhour #mindfulmoment
When does seeing become hearing? You can hear these colors! Symphonies of color in the garden-everywhere I look, there’s some combination of bass, melody, and harmony. No wonder the bees are dizzy with delight! #mindfulmoment #eachholyhour #beautyeverywhere #gardens